Here is a precis of Mary's life which Kath Lane our Presiding Member for Tunstall is currently writing for MU News.           Parts 1 and 2 below have been published in the Spring and Summer editions with Parts 3 and 4 to follow in the Autumn and Winter editions then subsequently here.

The life of Mary Sumner: Part One

I wonder if, like me, when you joined Mothers’ Union you knew anything at all about its founder Mary Sumner? I had heard of her, knew that there was a Mary Sumner House and was given to believe that she was the meek, shy wife of a clergyman somewhere far away in the south of England. Enid has invited me to share with you some information about Mary Sumner which may enlighten you. Forgive me if you know lots about her already!

Some years ago a member of our congregation who was a retired clergyman gave me a copy of a book called 'George and Mary Sumner - Their Life and Times' by Joyce Coombs. The book had been given to him by a member of the congregation in a previous parish some years earlier. When he showed me the inscription inside I was amazed that it had been given to him by Miss Effie Heywood who was a granddaughter of Mary Sumner and also Ciceley Gaisford who was a great granddaughter of Mary. It made the book seem even more special; published in 1965 by the Sumner Press it is the most comprehensive account of Mary and George’s life. 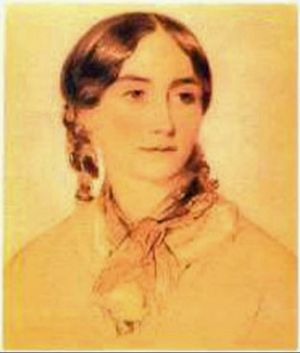 Mary Sumner was born Mary Elizabeth Heywood on December 31st 1828.  The Hewoods were an old and distinguished family who could trace their decent back to at least the twelfth century. Mary’s father, Thomas, married Mary Elizabeth Barton whose family owned estates in Saxby in Lincolnshire as well as Swinton on the outskirts of Manchester. It was in the family home at Swinton where Mary was born the youngest of three children. Mary’s father was a wealthy banker with wide ranging interests including collecting local books and  historical records.

So, Mary was a Northern Lass. Albeit a very privileged and wealthy one. Her time in the North of England was short lived and when she was about two years old her father decided that with the encroaching city and railway network he wanted his family to have a more rural upbringing. He gave up his career in banking and moved to Herefordshire. He bought a large country estate called Hope End from the father of Elizabeth Barrett Browning. Sadly the house burned down in 1872 but thanks to Elizabeth there are many descriptions of the house and grounds which she recorded.

The house was very grand with twenty two bedrooms and many carved marble fireplaces. The large central hall featured an organ upon which Mary became very proficient. Outdoors there were stables and green acres where Mary rode her pony, Strawberry, and seemed to have had an idyllic childhood. Mary was aware of the previous tenants and being an avid reader she became fond of the works of Elizabeth Barrett Browning including  poems such as The Cry of the Children and A Song for the Ragged Schools of London. Undoubtedly these works, which were a social commentary of the times, influenced Mary’s outlook on the world.

It is impossible to reflect on the life of Mary Sumner without looking at the life of George Sumner who became her husband in 1848. Their long and happy marriage certainly was an influence on Mary’s decision to create the Mothers’ Union.

George was born in 1824 when his father Charles Sumner was chaplain to King George IV. It is an indication of the King’s high regard for Charles Sumner that the King presented George with a silver tray when he was born. Being highly favoured by the King, Charles was eventually appointed as Bishop of Llandaff then later Bishop of Winchester. Charles Sumner was a prominent figure at Queen Victoria’s Coronation in 1837 and she presented him with the bible on which she took the Coronation Oath. I think these are important facts to note to illustrate the circles in which Mary’s husband and family mixed. I believe that the family connections to Royalty and those in power were important in the establishment of the Mothers’ Union. Indeed, Charles’ cousin was Samuel Wilberforce of the famous family who fought to abolish the slave trade.

George spent his early childhood at Farnham Castle in a religious household with the example of a dedicated and hardworking father. George went to Eton then Oxford. When he left Oxford he did the “Grand Tour” of Europe as was common with wealthy young people at the time. Mary’s mother had taken Mary and her sister Margaret to Rome at the same time. Mary aspired to sing opera and her mother thought some time in Rome would be beneficial. At a New Year’s Eve Ball in Rome when Mary was just eighteen, the couple met and fell in love. George returned from Europe and was made Deacon by his father and entered priest’s orders in 1848. His first curacy was arranged at Crawley in his father’s diocese not far from Farnham Castle. On July26th 1848 George and Mary were married. He was twenty four and she was nineteen and a half.

They began their married life at Crawley in Hampshire and probably would have stayed there longer had George’s mother not died. George and Mary were a great comfort to his father, the Bishop of Winchester,who was bereft and in 1851 gave George the benefice of Old Arlesford which was nearer to  Winchester Cathedral. 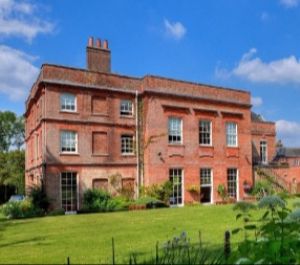 As the young couple moved into Old Arlesford Place with their two young daughters it was the beginning of many years of happy parenthood and service to the parish.

Mary recalled how she was beside herself with happiness and rapture when she first held her daughter in her arms. This was followed by a profound feeling of responsibility.” I shall never forget the awed sense of responsibility as I took her in my arms. It struck me how much I needed special training for so great a work and how little I knew. I felt that mothers had one of the greatest and most important professions in the world and yet there was none had so poor a training for its supreme duties.”  The Mothers’ Union was still far off and yet it all stemmed from this time in Mary’s life

“ Be yourself what you wish your child to be” These well known words were hung on Mary’s dressing table as a constant reminder of her responsibilities as a mother. The early years of motherhood and marriage were a huge influence in the framing of the objects of the Mothers’ Union. Mary’s entire focus was on being a wife, a mother and an active participant in parish life ; between the years 1849 to 1870 Mary declared she had no leisure time for work outside the parish. The vicarage ,Old Arlesford Place, was very grand with sixteen bedrooms, two dressing rooms, large dining room and drawing room and vast kitchen quarters. There were also servants quarters and stables to support the grand establishment.

A census in 1845 described the village as having 578 inhabitants with about half of the women being communicants but only a fifth of the men. There was also a low level of literacy in the population. Although the records for George and Mary’s time at Old Arlesford Place are meagre, it is clear that George was first and foremost a good parish priest. Mary immersed herself in parish life and had no illusions about the appalling conditions many of the parishioners faced. She recorded the daily grind of the labourers’ wives and how their food was almost entirely bread with potatoes for those with gardens or allotments and a scrap of bacon for Sunday. George and Mary between them set up many types of organisations; a branch of the Temperance Society, a Young Men’s Association, a Married Men’s meeting, and a Men’s Bible Class (which was the most successful and frequently led by Mary). There were schools already in existence but George and Mary added the Sunday School and night schools. There were meetings for mothers, a Cottage Garden Society and a branch of the Girls’ Friendly Society. But note – no Mothers’ Union yet.

George and Mary were diligent with their parish visiting and it is a testament of their faithful support of the parish households that the church gradually filled. Even with their busy lives they still found time to make friends and have a social life. They met Thackeray,Dickens, Carlyle and Charles Kingsley ( who wrote his famous “The Water Babies” while visiting them). After the birth of their third child George and Mary accompanied Bishop Sumner(George’s father)  on trips abroad while the children stayed with Mary’s parents. They visited the Channel Isles, Spain, Geneva, Ireland and Paris.

Now in their fifties George and Mary were about to become grandparents thanks to their elder daughter Margaret. It seems likely that this was the prompt for Mary to found the Mothers’ Union. She conceived the idea of a new organisation for women; something more than the Mothers’ Meeting which was largely attended by the “cottage mothers”. It was to bring together all mothers, rich and poor.

“Lady Mothers” and “cottage mothers” were to join as one.

All this day, O Lord,

Let me touch as many lives as possible for thee; and every life I touch,

Do thou by thy spirit quicken, whether through the words I speak,

the prayer I breathe, or the life I live. 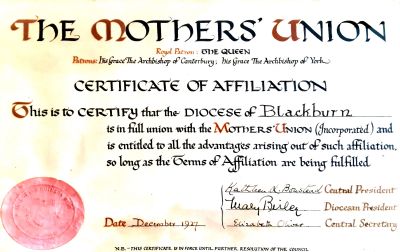